... with the Saba Saba farmers exhibition in 1994. Engineer Valentin and his wife Ruth Schnitzer came all the way from Germany to present a simple hydropower turbine system that powers a maize milling machine. Raphael Bapst was visiting the exhibition with his two young sons, and was captivated by the possibilities of a hydropower system. He became fascinated with the idea of installing a hydropower plant at Darakuta Ranch.

Raphael quickly realised that Valentin Schnitzer, with his extensive experience setting up hydropower systems in Tanzania, would be the perfect man to help him realize his goal of having hydropower on Darakuta. At this point neither Valentin Schnitzer nor Raphael Bapst realized that this was going to lead to the official founding of a new company, and that the two boys Raphael was pushing in a stroller would become shareholders of and key actors in the company.

Two years later in 1996, after a lot of hard work by Raphael, the Kou River was spinning its first turbine blades. A 50 KW unit had been installed and was working perfectly. It was made up of a standard KSB pump combined with a Mecalte generator, and a GP load controller that made Island mode possible. The turbine powered the whole Ranch, from its workshop and cooling containers to the farmhouse – everything was powered by self-made green energy. In 2002, after the system had been running without any interruption for more than six years, Valentin Schnitzer came to visit the power station, and made a proposal. He suggested building a bigger 1 MW station together, and selling power to Tanesco.

That was official founding of the Darakuta Hydropower Development company. Valentin worked out every little detail of the upcoming hydropower plant. He climbed up the escarpment about a hundred times, made measurements and calculations, and on paper, Darakuta Hydropower was born.

Everything was set, and all quotations were ready. Sadly Darakuta Hydropower never received the contract from Tanesco. All the documentation and paperwork was filed into folders and stored away for many years. Fast forward to 2010. The two small boys who were in the stroller had grown up. Things had changed, Tanzania’s population was booming and energy demand was increasing – small hydropower plans had become attractive for Tanesco. Valentin Schnitzer, who could have enjoyed his pension in a rocking chair, was eager to put new life into Darakuta hydropower, this time together with the second generation Bapst as well.

Many years passed while all the documentation was updated, plans were finalized, and the two Bapst brothers were read into the hydropower plans by Valentin. Finally, in 2015, the hydropower plant became tangible. It was a big year for Darakuta Hydropower. In January ground was broken, and construction officially started for a 270 kilowatt unit. On the 6th of April 2016, after toiling tirelessly for over a year, the first kilowatt was generated by the Kou River and pumped into the official grid of Tanzania – the power plant was officially commissioned and is running!

Work hasn’t stopped there, and we are now focusing on a second, larger project.

We currently produce 300 KW/h at our power house on Darakuta, from three different turbines. These turbines make up two separate power generating units.

Unit 1: A 50 KW unit that has be running since 1996, which has a KSB Etanorm pump RG XXXXX coupled to a Mecalte 75 KW generator. The system runs on island mode and is controlled by a GP load controller. This unit supplies power to the Farm, and any power that is not consumed by the Farm is burned off by dummy loads to keep the generator stable.

We are currently in contact with GP Electronics, as we would like to synchronise the 50 KW unit to the Tanesco grid.

Unit 2: A 140 KW unit comprised of two KSB Etanorm pumps coupled to a Siemens Asynchronous Motor. These are controlled by a power load controller (PLC) assembled and programmed by Hans Lottering and the team from Outec Controls. Their knowledge of controlling and synchronising an asynchronous motor is hard to find these days. Once set up, this is a very reliable system. Compared to a synchronous generator it is also much cheaper, and requires very little maintenance.

Originally the 700 meter pipeline, or penstock, carrying water from the intake to the turbines had a diameter of 300 mm. The first half of the penstock was made out of self rolled steel welded together, and the last half of the penstock was constructed out of normal PVC pipes. 20 years later the PVC was still in perfect condition, while the steel pipes had already started to leak. We therefore replaced the steel pipes with PVC pipes.

In 2015, to accommodate the 140 KW unit, we re-constructed the 700 meter penstock, this time using HDPE pipes with a diameter of 630mm, made in Tanzania by Plasco Ltd. 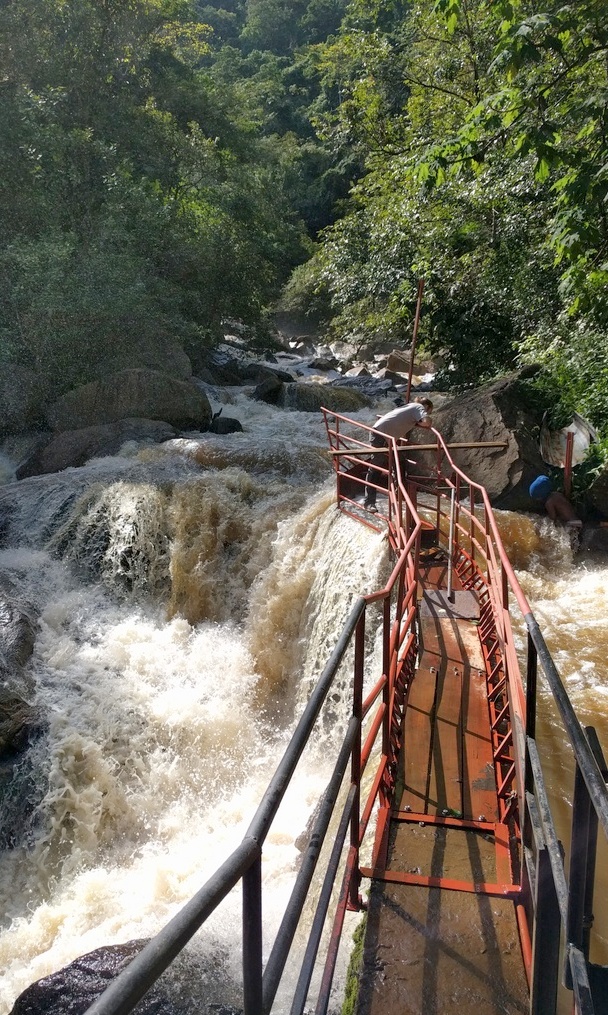 Operation of the Hydropower plant relies on a team of four Tanzanian operators that were trained by Florian Bapst. Learn more about who they are and their responsibilities by clicking on the link below!
Meet the Hydro Team!